Some mothers push their babies on a walk. Others drag them. 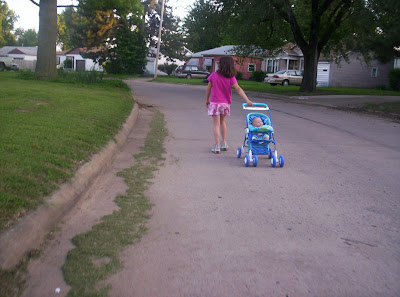 Nickel and I got married eight years ago. Here's a picture. Weren't we just the the cutest couple alive? Ok, so you can't really see all of Nickel's face, but he's a cutie. 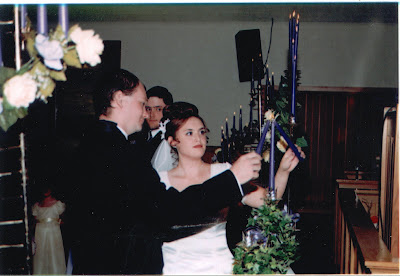 That's my brother in the back ground. He was the cheapest preacher I could find -free. My colors were purples and yellows. It was a fun little wedding.

Anyway, that was 1999. Our first year of marriage was by far the most difficult. Nickel and I hadn't really known each other that long, but I knew he was who I wanted to spend the rest of my life with. A month after that picture was taken we moved over three hours away from my momma. I had moved out of my parents house six months before that but still went to my mommas house almost weekly and talked to her on the phone daily. Being so far away was an adjustment. Then after being in the new city where I knew NO one for a couple of weeks we found out we were expecting a Peanut.

So just to recap, we got married in June, moved to Enid in July, and found out we were expecting a baby early August. That was a fun six weeks. I was lonely and hormonal. It's a wonder he didn't send me home to my momma's!

But we managed to survive both the first year of marriage and the pregnancy and have the ever so fun loving Peanut to show for it. But after eight years I finally feel like I know this man. I know how he takes his coffee -black with LOTS of sugar. I know more about comic book characters then I ever thought possible (which has actually won me brownie points at work), I can even actively listen when he talks about cars, Camaros are his favorite but he likes Chevelles, El Caminos, Corvettes, Novas, Malibu Station Wagons....

For our anniversary this year, being on a Tuesday, we dropped the Peanut off with Grandma and went out to dinner. We decided that downtown stood the best chance of not being crowded. Did I mention that Nickel hates crowds? He doesn't like most people. We drove by one place, it looked too crowded. We drove by a second place, there were a few cars, but the third place looked empty. And it was for the most part. I think the whole time we were there there were three couples served. We talked and enjoyed the good food for about an hour and a half without interruptions, except from our waiter who actually asked Nickel if he wanted a straw for his beer.

Nothing elaborate. We don't exchange gifts for our anniversay. We just usually enjoy a dinner for the two of us. That's fine with me, I don't want stuff. I just want his attention and it was mine, mine, all mine, for an hour and half on our special day.
Posted by Leslee at 8:30 PM 8 comments:

People That Tell A Good Story