The Boy Who Doesn't Talk (much) as you may have gathered has a few speech delays. I didn't start to worry about them until he was 3 and even now I'm not overly concerned.  He talks when he has something to say.  He started working with a Speech Pathologist, who happens to be a very dear friend of mine, at the age of 3. After several months of progress she asked if I had considered putting him into the school system. At age 3. I had never heard of such a thing. There was testing to be done but we soon discovered that he did in fact qualify for school services at the age of 3. The Boy Who Doesn't Talk (much) enjoys school and it has helped tremendously. However, as we all know, summertime is when even the brightest children can have some regression.

To combat this Peanut has accepted the challenge of helping The Boy Who Doesn't Talk (much) during the summer months. I have come up with some "lesson plans". I use the quotes because nothing is really set in stone.  I have divided the summer up into units that have a specific theme.  For the first two weeks the theme centered around camping because the second week we spent at a cabin in the woods down by the lake.  Peanut and I read stories to him like "Curious George goes Camping" by Margaret Ray, "Just Me and My Dad" by Mercer Mayer, and "Fred and Ted Go Camping" by Peter Eastman.  There were crafts that could be related to camping like painting with marshmallows, making an owl out of feathers I found on clearance at Walmart.  Pinterest led me to some great activities such as colorful pages with rows of fish.  The fish were in a certain pattern and the fish at the end were in black and white and could either be colored but we used the colorful Goldfish Crackers and this lesson was fun, delicious, AND helped with math skills. 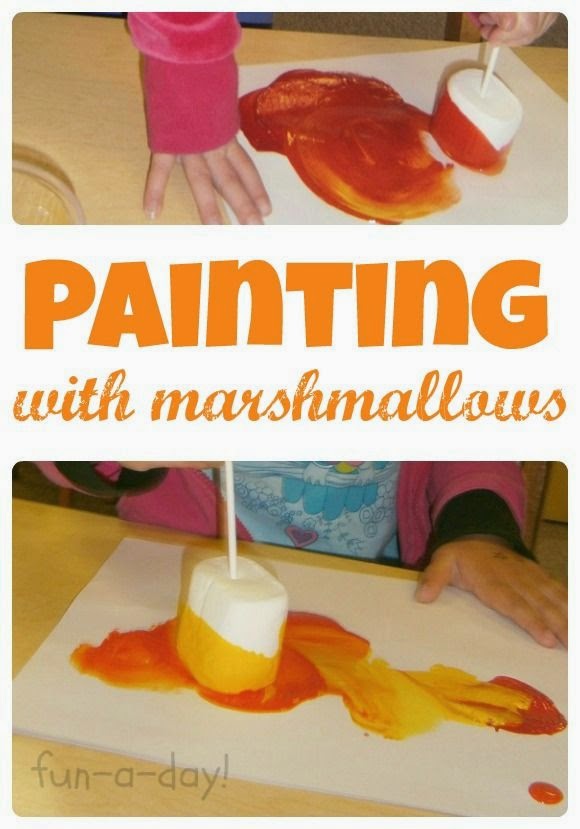 Check out this link to painting with marshmallows.

The second unit was about dinosaurs.  This is not The Boy Who Doesn't Talk (much)'s favorite subject.  He thinks dinosaurs are mean and scary and I had hopes that during this unit he would come away more brave.  Dinosaurs are still not his favorite, and that's ok.  He was able to work on his fine motor skills with a giant coloring book I found at the Dollar Tree. It only had 30 or so pages, but that was plenty for our two week lessons.  Each day I also prepared three lines for him to read and then rewrite in a writing tablet I purchased at Walmart. His Kindergarten teacher was kind enough to send home a copy of the sight words he worked on (and will continue to work on next year when we do another round of Kindergarten).  With these sight words and a few extra here and there I've come up with a few sentences.  During the Camping Unit his sentences looked something like, "I like to fish", "We like to camp",  or "I see a red fish". Fish and Camp were not a sight words but they fit the unit. I only add one or two non-sight words to his writing pages.  For the Dinosaur Unit I threw in the word "dinosaur". My goal here is that the more he writes these words the better chance he'll have at remember them.  I've noticed the words I used more frequently were the words he was able to read during a little quiz I gave him yesterday.

As a reward, Nickel and I took him to a local museum where they currently have a dinosaur display. Peanut was sound asleep when we left so we gave her the afternoon off from all of us. 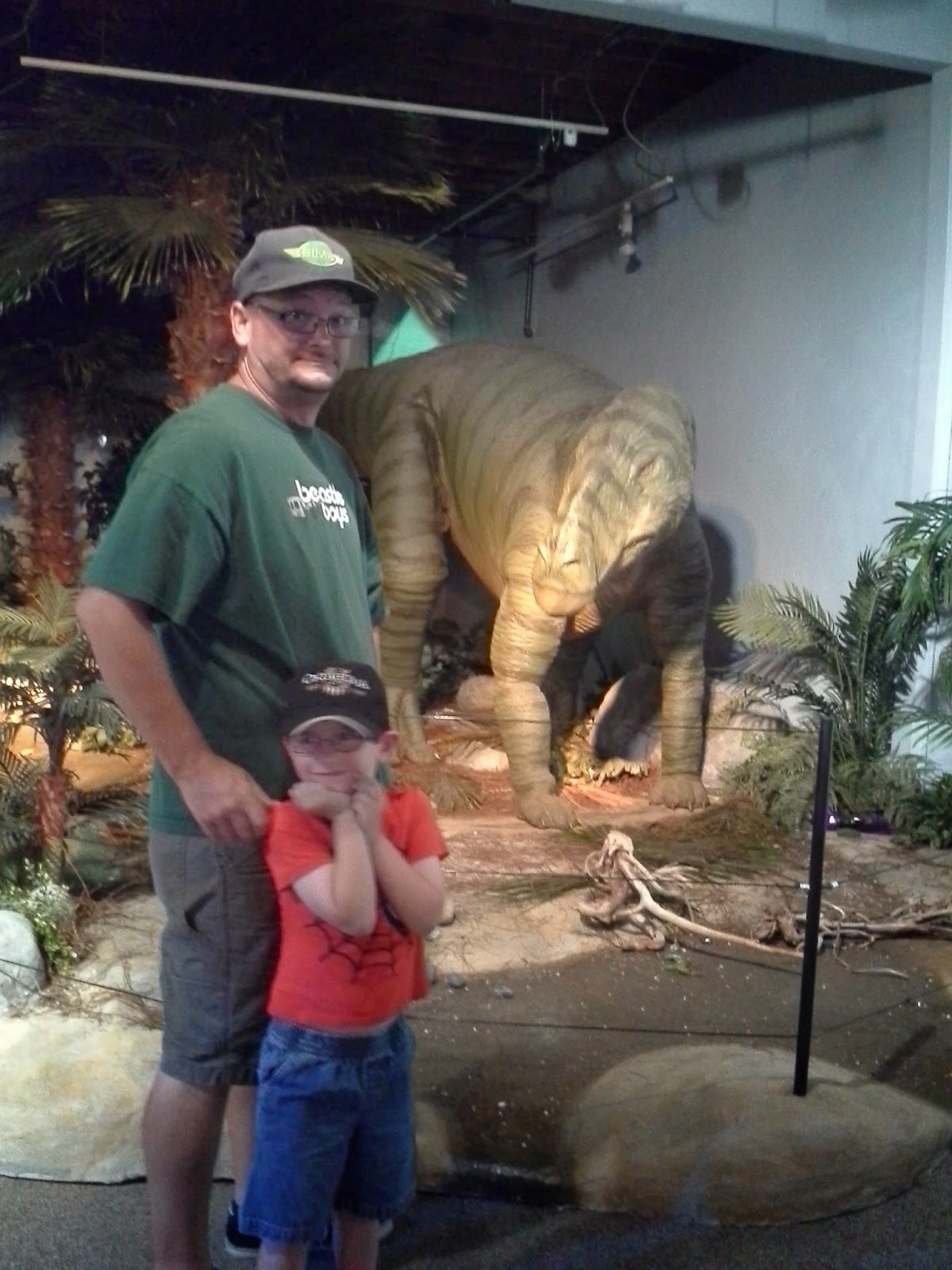 Pictured here with daddy, The Boy Who Doesn't Talk (much) was a little nervous at the sheer size of the beasts that actually moved (albeit robotically) and roared. 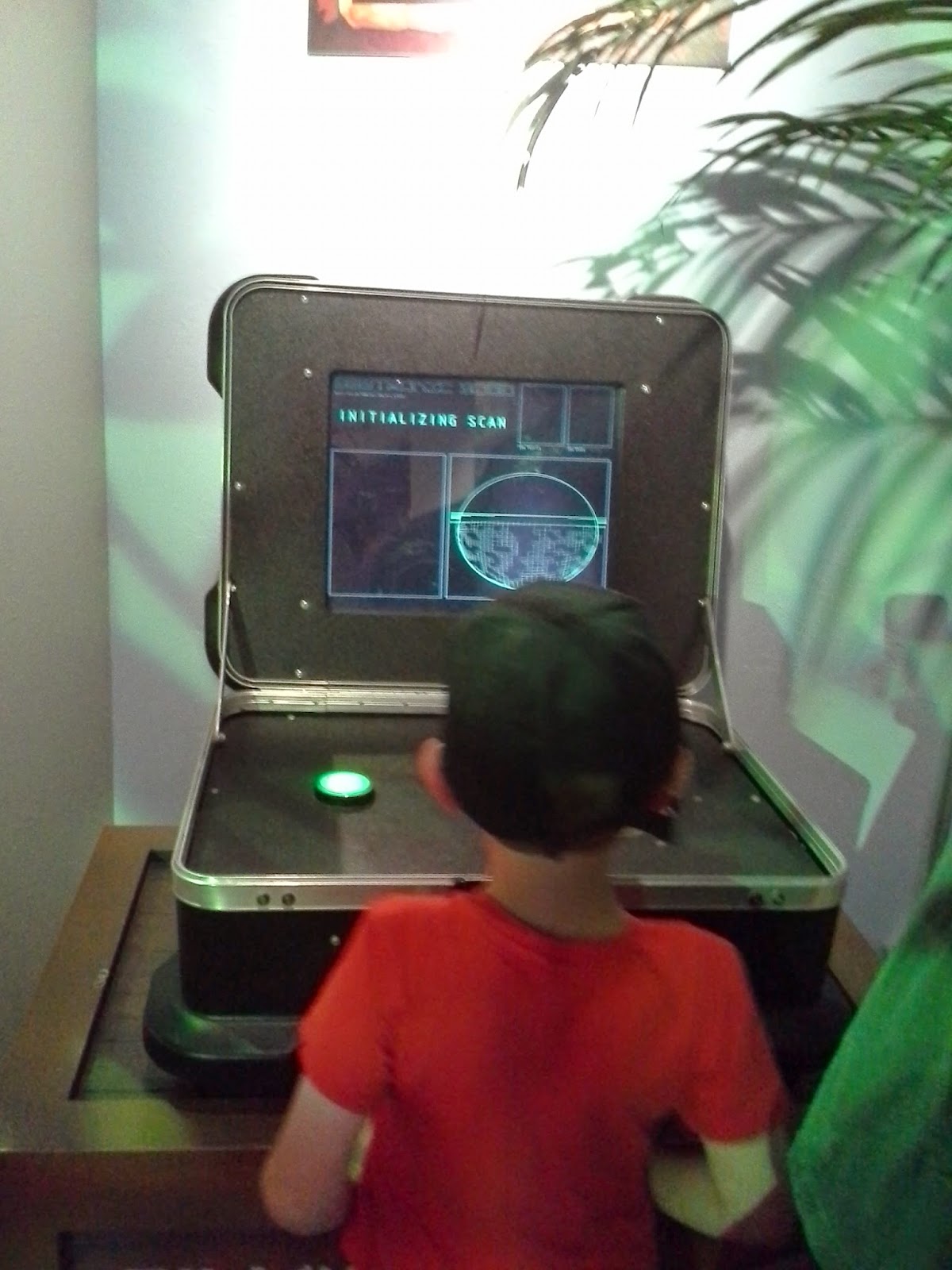 This little gadget allowed you to put a "real" dinosaur egg in to be scanned and you could learn what sort of dinosaur is inside. There were four eggs and of course The Boy had to do them all.  We stayed in this area just long enough to see them but quickly moved on to see the rest of the museum and to play.  Outside, across the street there is a castle that with admission to the museum could play at as well. The Boy led Nickel and I to the top of one tower and around in circles.  I should have taken a picture of the castle as it is quite impressive.  At the back of the castle we found some xylophones and the The Boy wrestled with an alligator! 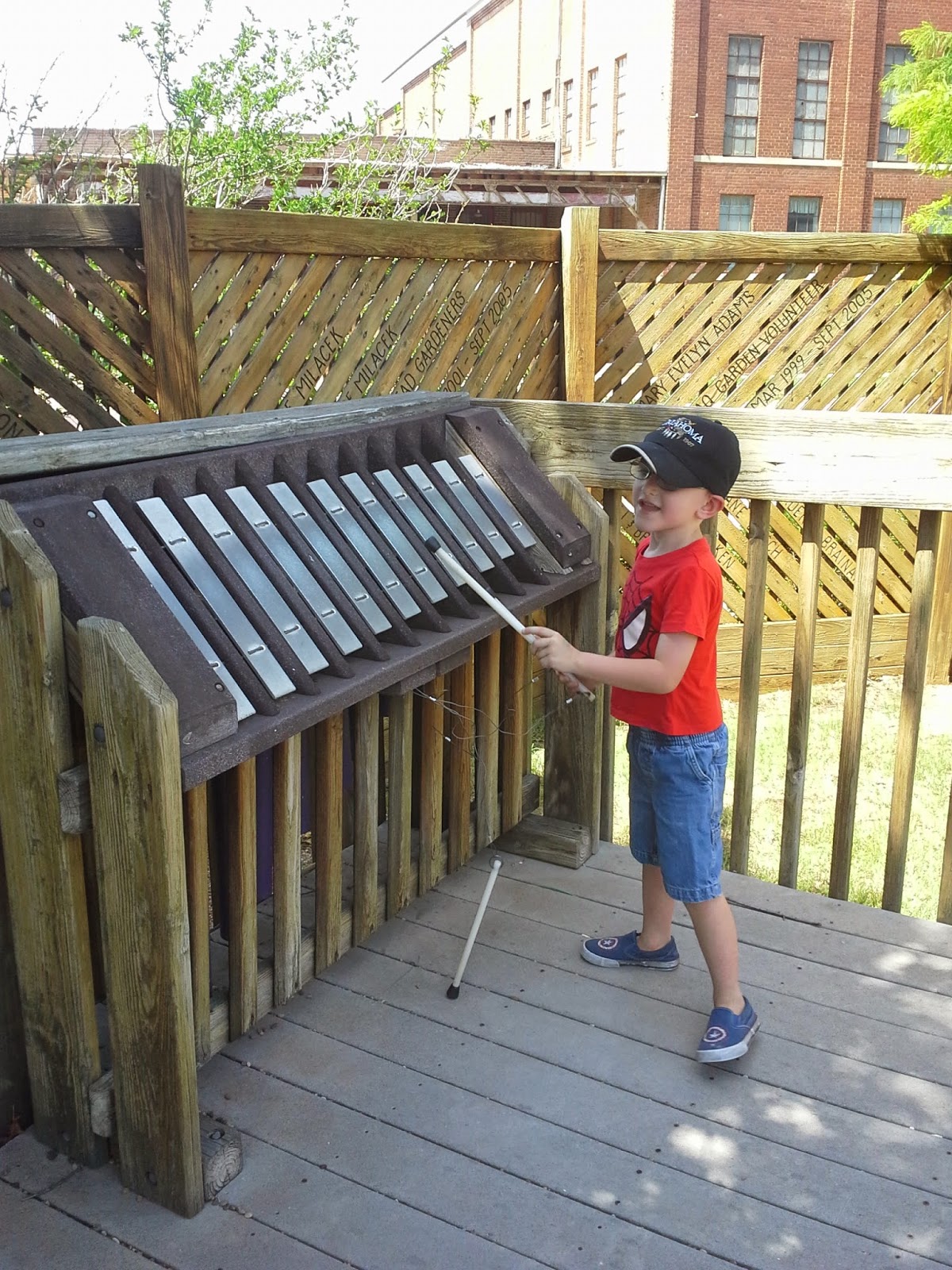 We concluded our Dinosaur Unit with a trip to Cherry Berry where we cooled down a bit.  Up next is the most anticipated Space Unit, which happens to be high on The Boy's interest list.  We're considering taking a trip to the Science Museum in OKC in a couple of weeks.


"Tell me and I forget. Teach me and I remember. Involve me and I learn." Benjamin Franklin

Posted by Leslee at 9:26 AM No comments:

Last night The Boy Who Does Not Talk (much) came into the living room and though he didn't exactly say "Look at me! Look what I did" he had a bit of a smug look on his face. He was proud of himself. At first I noticed the blue maker on his leg as if he had gotten a little carried away. Then I saw the perfect "D" on his foot along with the now blue toenails. His fingernails were all this same shade of dark blue.  There was no way I could yell at him for what he had done. No sense in explaining that boys don't paint their nails, many boys do these days.  Besides, I only buy the washable markers and even if it didn't come right off what's the big deal, he's a little kid!  So I did what any good mother should do. I took his picture. I call the whole family in to see his accomplishment. Thank goodness this kid has some career choices. 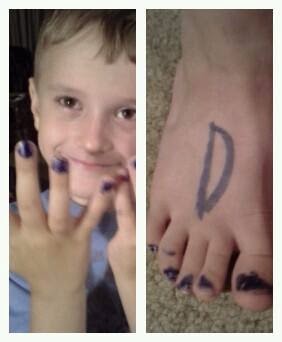 "Being a kid and growing up is such a cool part of life. When you're young, you have no worries, no drama, on your imagination. It's the best!" -Devon Werkheiser

Posted by Leslee at 8:48 AM No comments:

Sometimes things require more than 140 characters or a status update that will be scrolled past for a day, maybe two before it's forgotten.  Sometimes things require a lengthy explanation so that years from now each moment, each emotion can be remembered and treasured. And this is the reason I still have my blog, long after they hype of blogs have worn off. Oh yes, lots of people still have blogs but I don't see very many personal blogs actively being used, but there are a few. Mine hasn't see much traffic over the last six years.  It seems a little crazy to me when I stop and think that this blog is almost a decade old (July 29, 2005 was the first entry). Through the Fresh-Cut Flowers I have shared some highs and a few lows.

Peanut was five years old when I started writing here. The same age The Boy Who Doesn't Talk (much) is now.  I feel this is significant and it is time to start again. Again. To pick things back up that I've put down for a season. Much has happened over the quiet years. I finished my Associates Degree and am continuing towards my Bachelor's Degree. I hope to accomplish that little goal in December of 2016.  Peanut will start high school in the fall and The Boy Who Doesn't Talk (much) will give Kindergarten another go. Nickel is still plugging right along. Recently, I was given a promotion at The Land of Books. While I enjoyed my job at the Circulation Desk and will miss seeing my regulars every day or week, I have moved into the roll of Administrative Assistant. I will like this job very much. I get along very well with the director and I believe we will make a wonderful team.  With this move I hope to be able to sit and blog again from time to time. The Boy Who Doesn't Talk (much) is as entertaining as his sister at that age (and what kid isn't?) so I will have stories to tell and maybe even a few pictures as well.

In the meantime I plan to clean up the blog a bit. Some of the 495 posts in my archives need to be weeded through for content sake.  That project alone might take a month. Eeks.

"The most effective way to do it, is to do it." Amelia Earhart
Posted by Leslee at 7:48 PM 1 comment:

People That Tell A Good Story